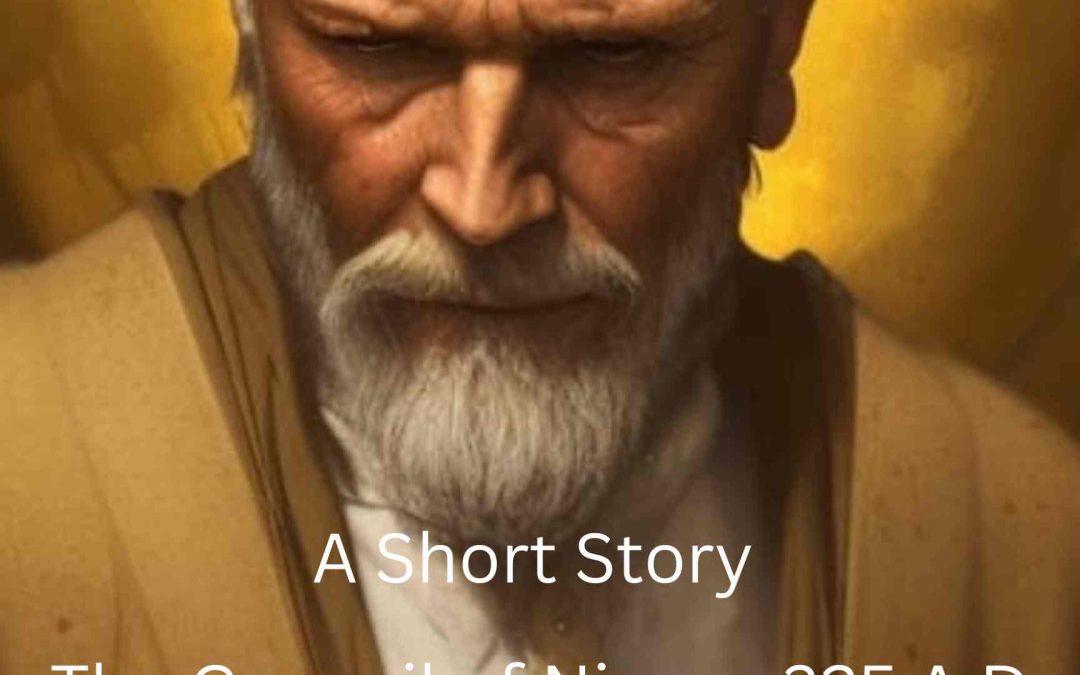 Arius surveyed the crammed room. Rows of ornate wooden chairs surrounded him on three sides. Each chair contained a bishop or elder of a church in the Roman Empire. The greatest theological minds. The most devout followers of Jesus. Most could trace a line of mentors back to an apostle, one of the twelve. Attendants, disciples, and servants lined the back wall and sat at the feet of their leaders. Arius tightened his jaw, a move that accentuated his strong chin. He checked the folds of his red flowing robes. His beard was trimmed as evenly as a hedge owned by an obsessive gardener. His bright eyes focused on the leaders he knew.

Arius nodded to Eusebius, a long-time friend whose support for his theology had earned him the opportunity to argue his case at the council instead of being exiled outright. Barnaby sat attentively to his left. They had traveled together often and shared more than a few late-night conversations around the fire about the intricacies of faith. Far to his right, against the wall, the emperor himself sat on a raised platform on a gilded chair resembling a throne. The emperor nodded slightly. Arius bowed. He watched his best sandals clop against the floor as he neared the podium. His posture straightened and his brow softened as his lips grew into a well-practiced smile. Every set of eyes was on him. Every set of eyes but one.

In the center of the gathering, three rows from Arius slouched Nicholas in a high-backed wooden armchair. His eyes were shut peacefully. His belly rose and fell in a steady cadence. Although Nicholas was quite younger than Arius. He looked as old, maybe older. His permanently red face gave an appearance of embarrassment, but if one inspected closely one would see the scars from lashes and branding irons. His left ear was missing its lobe and deep wrinkles etched his weathered face. His long white beard rippled as he blew out each snore.

Nicholas sputtered and shifted in his chair, smacking his lips loudly. Arius’ eyes rolled, he let out a controlled sigh and took his place at the speaker’s podium.

An attendant sat on the floor beside Nicholas, as red-faced as the bishop, looking between his napping charge and the speaker.

The official on a raised platform thwacked a gavel against a desk and called the murmuring crowd to order.
“Next on the agenda,” he cried with a voice that bounced off the cavernous walls “The nature of the God-head. First to speak, Arius of Cyrene.” To his left, a dozen men rose to clap. Nicholas’ eyes opened for a brief moment then fluttered closed. The rest of the room remained seated. Arius spotted Alexander, his most vehement opponent. The Bishop crossed his arms and whispered to the disciple at his side.

Arius blew out a breath and raised his hands with a theatrical flourish. He began his argument.

“Brothers, fathers, and servants of our Lord Jesus Christ. I have been asked to defend my view of the essence of a God beyond all understanding.” Arius met the eyes of each of his supporters on the left side of the assembly. “It is a task I am unfit for. God’s incomprehensibility, his immenseness, surpasses the greatest brain, let alone this simple humble servant.” Sympathetic chuckles scattered about the room. Arius pointed at himself with two full hands and gave the elders in the center-right a look reminiscent of a stray dog requesting a scrap.

“Humble like a rooster!” shouted a dark-skinned man seated next to Alexander. The men in his section chuckled. The official pounded the gavel. Nicholas stirred.

Arius ignored the jeer and gripped the podium.

“It has been said that I denigrate the Savior our Lord by my position. I tell you this is untrue, but that I extol the greatness of God and His preeminence.”

Arius stepped to the left of the podium and paced with measured steps until he stood arm’s length from the first row of chairs. He met the eyes of each man. Somehow when he spoke one could believe that Arius addressed only him.

“We know that God is one. Supremely powerful. Indivisible. We know that—“

Nicholas coughed violently. His head raised for a moment then collapsed into the seat back. His chest rose then fell with a snore that pushed wind out of his lungs with the force of a bellows.

Nicholas’ head tossed to one side and a line of drool slunk across his beard. His hands rubbed his knees as if petting a cat on each leg.

“Let him rest!” A voice shouted from the back of the room.

“Yes,” said another “He is tired from his midnight gift-giving.”

The men laughed. The official scowled.

“Nicholas!” The official lifted his gavel, paused, then rose his eyebrows catching the eye of the attendant. “Son, awaken your master.”

The attendant’s shoulders dropped. He placed both hands on the bishop’s shoulders and shook as if rocking a baby. Nicholas swayed like a pendulum. The boy shook harder. Finally, Nicholas stirred. His eyes darted open. His arms gripped the arms of his chair. His head spun wildly like an animal trapped in the coliseum deciding if it should run or fight.

Nicholas checked the room. His eyes bounced from elder to elder until they landed on Arius. His cheeks went from red to purple.

“Father Nicholas,” the attendant slipped away as the official spoke “Thank you for joining us. Did you have a fine nap?”

“I have been rescuing a ship doomed to wreck” Nicholas replied. Several elders scoffed. The official banged his gavel again.

“Nicholas, Arius was addressing the bishops. I insist you treat him with the respect of a fellow elder and brother in Christ.”

“Fine, sir.” Nicholas’ small jovial eyes met several of his counterparts. Then he returned his gaze to the official. “Nothing like waking up to a bit of heresy”

Download the full story on your favorite reading device here.